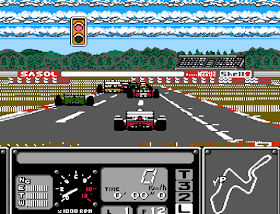 Genre: Action, Racing / driving
Perspective: Behind view
Gameplay: Arcade
Vehicular: Automobile, Track racing
Published by: Palcom Software Ltd.
Developed by: Konami Co.
Released: 1993
Platform: Nintendo (NES)
"Formula 1 Sensation" is one of the few games in the development of which the representatives of "Konami" received all the necessary approvals and licenses from the organizers of the great races "Formula 1 World Championship" and harmoniously used almost all real elements and attributes in the gameplay. All opponents presented in the game are divided into three groups and are based on real human skills: A, B and C. All tracks and drivers are based on real tracks and drivers from the 1992 season in the Formula 1 championship of the same name. There are even pit stops and a team leader who tells us when it is better to make planned stops and enter the pit stop to change tires, repair body parts, and even for more global replacements. The weather here, as in real life, changes several times during the race, or even does not change at all. So it is impossible to plan ahead for the race, all pit stops must be planned right during the race.
To complete each track, you need to make less than ten laps, this is done to make the process more arcade (let me remind you that in a real race the number of laps sometimes reaches 60!). Before starting the game, you can choose between "Free Run" (one quick race) or "Grand Prix" (start a long season). In the season mode, everything is very real: first you need to qualify well and get into the top 12 places, and then take part in the main race with well-known rivals. The available characters include all real racers, including the legendary Ayrton Senna, Nigel Mansell and Michael Schumacher.
Everything is real in the game "Formula 1 Sensation". The billboards on each circuit include the names of real sponsors from around the world, including Shell, Nestle, Sasol and Agip. Before the start of the season, you can configure the future car yourself: choose the type of body, color, chassis and so on. And in the "Free Run" mode, you can choose 11 opponents.
The only difference between the European and Japanese versions is the slightly differently designed information windows showing post-arrival statistics. The music in the game is painfully similar to the soundtracks from "Blades of Steel" and "Teenage Mutant Ninja Turtles".
Overall, Formula 1 Sensation is one of the best Formula 1 games for the NES. Nice graphics, decent music and very realistic gameplay (including fully licensed racers and tracks) make the game very valuable.
‹
›
Home
View web version