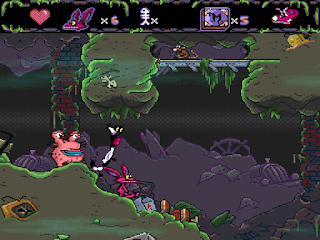 Genre: Action
Perspective: Side view
Visual: 2D scrolling
Gameplay: Platform
Published by: Viacom New Media
Developed by: Realtime Associates
Released: 1995
Platforms: Super Nintendo (SNES), SEGA Genesis / Mega Drive
AAAHH Real Monsters is one of the most popular cartoons found on the children's television channel Nickelodeon. In this game, Ickis, Krumm and Oblina (future monsters) have to go through many tests to be called real MONSTERS! And these are 25 levels and 5 bonus levels! Someone may be scared away in this game by the incomprehensible appearance of the main characters, but one should not expect another from the monsters. Graphics and sound at a decent 16-bit level, addicting gameplay. This game must be played!
Versions for SEGA Genesise / Super Nintendo are similar as two sisters, the difference is insignificant. The colors are understandable, and even in the version for Sega, the eared monster (Ikis) yells in a human voice, and in Nintendovskaya it growls. The music in the SNES version is more enjoyable, but nevertheless, the SEGA Genesis version is made better.
‹
›
Home
View web version