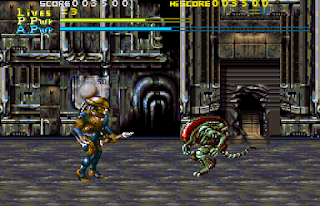 Genre: Action
Perspective: Side view
Gameplay: Arcade, Beat 'em up
Setting: Sci-fi / futuristic
Published by: Activision
Developed by: Jorudan Co.
Released: 1993
Platforms: Super Nintendo (SNES), Arcade Machine
Quite an average Beat-Em-Up for such Alien brands. Not very rich reception of blows. Almost all the time, aliens leave behind useful things, such as an invisibility device, energy recovery and all kinds of throwing spears and disks, but this is also not particularly pleasing. Blaster shooting looks great, which is also very effective against aliens. Thanks to its frequent use, the game from Beat-Em-Up can be turned into a real Shooter and plenty of shooting. But in one genre or another, the game has few advantages.
‹
›
Home
View web version