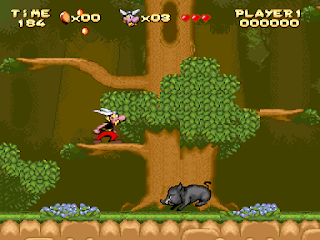 Genre: Action
Perspective: Side view
Visual: 2D scrolling
Gameplay: Platform
Published by: Infogrames Europe SA
Developed by: Infogrames Europe SA
Released: 1993
Platforms: Super Nintendo (SNES), SEGA Master System (MS)
It is fiftieth year BC.
Gaul is completely occupied by the Romans.
Although, not completely ...
One small Gaulish village continues to disobey
the authorities of Rome, its inhabitants are protected by a magic potion, which
makes them invincible.
Obelix is missing!
Yes, not only disappeared, but he was kidnapped by the Romans and taken to Rome.
Asterix must go on the trail of the kidnappers and quickly save
his friend, until Caesar threw him to the lions to be devoured!
The game was created based on the comics Goscinny & Uderzo.
‹
›
Home
View web version