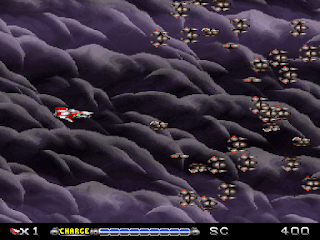 Genre: Action
Perspective: Side view
Visual: 2D scrolling
Gameplay: Shooter
Vehicular: Flight / aviation
Setting: Sci-fi / futuristic
Published by: Activision
Developed by: Athena Co.
Released: 1993
Platform: Super Nintendo (SNES)
Bio Metal is pretty good, but sometimes very difficult flying-shooter. According to the plot of the game, a fierce space war took place in the Milky Way, during which all resources were exhausted. The remaining forces are sending the fleet in search of new resources to uncharted planets. On one of them, they stumbled upon a race of semi-machines, which mercilessly destroyed the entire fleet and now claims to take over the Milky Way. The Council called this race "BioMetal" but, fortunately, the intelligence found out where the most units of the hostile forces are concentrated, which means that their main brain is located there. And only a specially designed ship can reach this place. And your two young pilots - a girl and a boy - begin to fight numerous hostile creatures. In and Bio Metal is not a rich selection of weapons. The main trick lies in the secret weapons of our ship, which can be used in different ways: both as a bomb that sweeps away everything in its path, and as a throwing ejection, which, like a devoted pet, will slowly return back to you, without leaving the ship, as from its owner. ... And probably the most common use will be as a force field, effectively protecting the ship from the small bullets of numerous enemies. But even as a devoted animal, this special weapon gets tired and needs to be constantly turned on, then turned on in the most dangerous cases, then constantly turned off to charge with energy, where, by your standards, you are able to cope with ordinary forces. So in Bio Metal, the main role can be assigned to the so-called minor tactical component. The game has gorgeous music and good graphics.
‹
›
Home
View web version