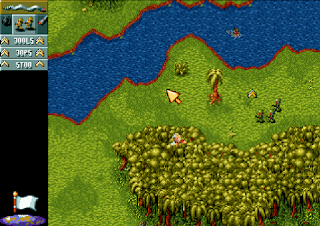 Genre: Action, Strategy / tactics
Perspective: Bird's-eye view
Visual: 2D scrolling, Isometric
Pacing: Real-time
Gameplay: Real-time strategy
Interface: Multiple units / characters control, Point and select
Published by: Virgin Interactive Entertainment
Developed by: Sensible Software
Released: 1995
Platforms: Atari Jaguar, 3DO Interactive Multiplayer, DOS, Super Nintendo (SNES), SEGA Genesis / Mega Drive
A legendary game that everyone should play at least once. To plunge into the atmosphere of black humor, which is a lot in the game. There is also blood in the game, which is so loved by many players. In the game you have to take command of the soldiers, at first you will control two warriors, but gradually their number will increase, as the missions will become more difficult. Your main goal is to clear the territory from the enemy, but there will also be missions to free hostages and blow up buildings. You can control both the whole team and its parts at the same time, while the rest will stand in defense mode and shoot at opponents if they fall into the zone of sight. The levels are quite varied.
‹
›
Home
View web version