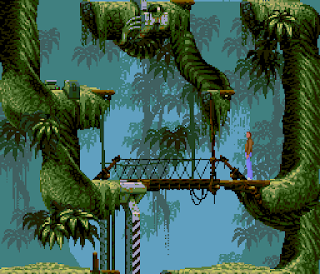 Genre: Action
Perspective: Side view
Visual: Fixed / flip-screen
Gameplay: Platform, Puzzle elements, Shooter
Setting: Cyberpunk / dark sci-fi
Published by: U.S. Gold Ltd.
Developed by: Delphine Software International
Released: 1995
Platforms: Atari Jaguar, 3DO Interactive Multiplayer, DOS, Super Nintendo (SNES), SEGA Genesis / Mega Drive
The legendary Flashback game, which tells us about the exciting adventure of Conrad B. Hart, made in a style similar to the game Out of this World. As is clear, we have to play for the employee of the Galactic Bureau of Investigation, Conrad Hart, who learns about the alien conspiracy, some of them high-ranking officials in the guise of people. But the aliens guess about it, kidnap him and erase his memory. Hart manages to escape, but he is wrecked in the wild jungle of Titan. There he finds one of the halocubes, which reveals a small piece of the veil of secrecy for him, about himself and tells him where to go. Your main task in the game is to save the earth and remember everything that was erased from Hart's head. Do not expect a good ending, Hart will never be able to return to Earth. Perhaps this is why the sequel to the game Fade to Black for PlayStation (PSX) and DOS appeared.
‹
›
Home
View web version