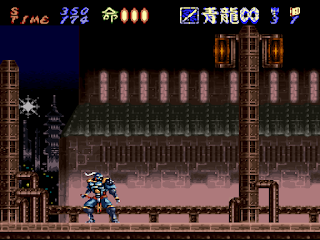 Genre: Action
Perspective: Side view
Art: Anime / manga
Gameplay: Platform
Published by: Hudson Soft USA
Developed by: CAProduction, Red Company Corporation
Released: 1995
Platform: Super Nintendo (SNES)
We play as a cyber ninja who used to be a human. In the story, one ninja clan decided to exterminate another for the sake of the Holy Grail, which can destroy the world. After the brutal massacre, one person still survived. He, who is dying, with the help of advanced cyber technologies, is turned into a powerful cyborg in order to take revenge and return the Grail. The cyber ninja has a very large set of skills: it is possible to use various weapons (sword, harpoon, shurikens, bombs, super discharge) and all kinds of acrobatic stunts (sliding, somersaults with a blow down, jumping from walls and screens, climbing ceilings). Shifts L and R play an important role in the gameplay. Performing a front somersault, the character accumulates strength, which can be used by pressing the attack or jump. Depending on the amount of accumulated energy during this acrobatic stunt, the character performs an enhanced technique. There are 6 types in total. One has only to learn all the attacks and maneuvers, and the gameplay will become simply furious.
‹
›
Home
View web version