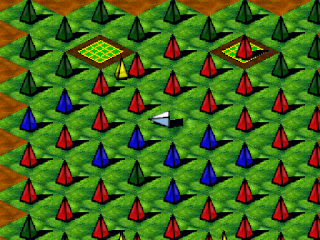 Genre: Action
Visual: Top-down
Gameplay: Puzzle elements, Shooter
Interface: Direct control
Published by: Older Games
Developed by: Looney Labs
Released: 2007
Platform: 3DO Interactive Multiplayer
Icebreaker 2 was written back in the 90s, shortly after the first game, but due to poor public reaction to the first part, it was not released. For a long time, the only place where Icebreaker 2 could be seen in the form of an amateur arcade machine was the home of Andrew Looney, the creator of the game. But the revolution thundered the news - it was possible to crack the 3DO encryption system. So Icebreaker 2 was released for 3DO by Older Games on August 3, 2007. But already on December 14 of this year, Older Games was absorbed and no longer sold discs.
The player has 150 levels at his disposal.
Despite the same visual component, the game has undergone significant improvements compared to the original.
In addition, a screensaver is built into the game, which turns on after 5 minutes of player inactivity.
‹
›
Home
View web version