Knights of the Round (SNES) 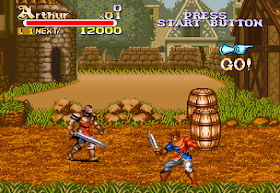 Genre: Action
Perspective: Side view
Visual: 2D scrolling
Gameplay: Beat 'em up
Setting: Europe, Fantasy
Published by: Capcom U.S.A.
Developed by: Capcom Co.
Released: 1994
Platforms: Super Nintendo (SNES), Arcade Machine
The era of chivalry. So many centuries have passed since that time, and beautiful armor, double-edged swords still excite the hearts of many. And how many different legends and legends about these times are kept by massive library shelves. And each of them has something different, special. Perhaps one of the most famous is the legend of King Aurthur and the Knights of the Round Table. There were so many different adaptations, poems and simply magnificent games for this magnificent legend. But in each work the world always appears in a slightly different light ...

It all started with a stone. And from the very usual. A large steel wedge was driven into the center of the stone, from which a magnificent sword protruded. The hilt of the sword was decorated with a Latin inscription: "Whoever draws this sword from the stone is the rightful king of Britain." For many years, the sword patiently waited for its master. More than one hundred knightly hands unsuccessfully tried to take out this blade (for example, to take out means crushing the stone is already against the rules). And now, this day has come. The knight, whose name is Aurthur, brushed the dust from the hilt of the great sword, placing it in his scabbard. Finally, the true king is found. And here he is the long-awaited “Happy end”. Although no, this moment is really just the beginning (what can you do - the audience asks for more). The kingdom is in decline (or rather, there is no kingdom at all yet), people now and then get their throats wet in taverns and periodically cut them to each other. Okay, this is still half the trouble, because the news that reached the ear of the great Merlin, the advisor (and even the archmage) of King Aurthur, did not please either the first or the last. Holy grail. A powerful ancient artifact has shown its mark again. Peace or chaos. Life or death. It all depends on whose hands this cup falls into. And as always, there is no time to think.

So, the future kingdom is in serious danger (serious, therefore, serious - do not ask unnecessary questions). Several brave knights will have to clean up the next mess, of course, under your strict control. Each of them has its own combat characteristics. Someone is fast, someone is strong, but the choice is always yours. Here are these brave guys:

Leader of the Knights of the Round Table. Founder of the legendary Camelot - a city of equals. A legendary ruler who conquered many with his wisdom and justice (of course, not without the help of Merlin, his mentor). Alas, he no longer flirts with the ladies, for he is already married to the magnificent Lady Guinevere. In battle, he maintains composure and sobriety (in the literal sense of the word). Pays equal attention to both the power of the attack and the speed of its implementation. And the legendary sword - Excalibur always reaches the body of the enemy.

A quick fellow. Young, handsome, smart and courageous. The idol of many ladies. Member of the Order of the Knights of the Round Table. And also the first knight of Camelot. In battle, it deals fast, but low-power strikes. Armed with a saber.

Bouncer of Camelot. Alone, he will not be afraid to fight with a dozen knights. You will not meet a more terrible enemy in battle, for this is not only a mountain of muscles - he also has more than enough brains (they do not hold fools in the order). Let him strike slowly, but if he hits, then that's it ... He goes out onto the battlefield with his beloved poleaxe.
And so a group of knights goes in search of the sacred bowl, but what is it there? Village. It is all on fire and merciless enemies slaughter all the inhabitants indiscriminately. At one point, the sound of swords leaving their scabbards cut through. A few minutes later the gallant knights are already defending the village. So the story begins.
On your way, you will meet many opponents, starting with ordinary thieves and knights, and ending with mighty lords (whose dimensions are even larger than Sir Percival) and magicians. And they all understand only one language - the language of hardened steel. How this is done, I think, you do not need to explain. As in any Beat'em Up, your hero has a standard (chopping in this case) punch, block and jump. Sadly, only Sir Percival is capable of running, and even then not far. Of course, all knights are very mobile, but the lack of running is a clear drawback. Okay, in exchange for this, our heroes are able to gain experience for defeated enemies and taken away treasures. With each new level obtained, the knight is upgraded - the restoration of vital energy and an increase in combat characteristics. There are only three different parameters Power (blow power), Defense (armor protection), Speed ​​(attack speed). Which of them will be given special attention depends only on the chosen knight (for example, Sir Percival mainly increases the power of blow and defense).
War is like war - there are always trophies of war. In our case, they are various treasures (chests with gold, silver tea sets, etc.). For them, as usual, you are awarded points that are necessary to get a new level. You can also get something to eat (salad, chicken, etc.) in order to restore your vitality. It looks very funny that the trophy can be divided into several parts (just slash it with a sword). So - don't cheat your partner. But one of the most valuable prizes is a magic wand, for it immediately raises one level (alas, it will not work to divide the magic wand). But what is a knight without a faithful horse? Since there is no one of your own, then you can borrow from the enemy (after crushing the last skull). What can you say - a knight on horseback is doubly dangerous!

Immediately, I note that the developers paid special attention to the graphics in this game. Gorgeous medieval backgrounds - the detail is amazing. They fully reflect the entire entourage of those times! As for the main characters, a pleasant surprise awaits you here. With each new level, the appearance of the knight will change (sometimes even quite significantly). So your knight will constantly improve his armor and weapons (King Aurthur will even have a red cloak over time). This is an extremely rare feature in this kind of games. Enemies are also not sewn with bast - excellent knightly armor of various directions. You will meet both halberdiers and warriors famous in the anime with massive swords (they will even drag them along the ground before attacking), as well as many others. The animation of this whole thing is also at a decent level. In general, you definitely will not offend your eyes.
Music and sound:
And here the developers relaxed a lot. Yes, throughout the game we will be accompanied by music in the medieval style. But the variety and quality sometimes make you want to be better (SNES is capable of more). Sounds, frankly, a disgrace for the SNES. Although I am glad that they are still there.

The game turned out to be quite difficult, mainly due to some flaws in the collision events. Also, if they began to beat you or, even worse, surrounded, then you can save yourself only with a super-blow (it takes away part of your vital energy), otherwise there is a very high probability of losing your life. Fortunately, there are 3 difficulty levels. The higher the level, the faster the opponents become and the more lives they knock out. It is also pleasing that the developers have also highlighted 9 continue (regardless of the difficulty level) - after which you return to the place of your death (you can even change the character, and the current level is saved). But only two lives are given (again, regardless of the difficulty level), but not enough - one could give more for the easy level.

As a result, we got a Beat'em Up of medium quality. Great graphics, but a little underdeveloped gameplay, as well as weak voice acting. It's a shame, because the guys from Capcom could bring this whole thing to mind - then the game could be called a masterpiece, and this is how a somewhat special Beat'em Up in a medieval setting turned out.
‹
›
Home
View web version