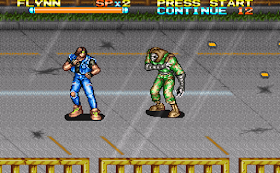 Genre: Action
Perspective: Side view
Visual: 2D scrolling
Gameplay: Arcade, Beat 'em up
Setting: Sci-fi / futuristic
Published by: Jaleco USA
Developed by: Jaleco Ltd.
Released: 1994
Platform: Super Nintendo (SNES)
Rushing Beat Shura / Peace Keepers is the third installment of the Rushing Beat series. The quality bar has risen again, reaching an even greater peak of perfection, which is why this Beat-Em-Up can be safely classified as the best in its genre. What is very pleasing here is the complete freedom of movement, as in Golden Ax III. But here she is much richer and can lead to unpredictable places. Even going through the game many times, you can still stumble upon unexplored levels and new bosses. Characters have hidden techniques, for example, using a bazooka, a meteorite falling on the heads of enemies, or turning into a monster on their last gasp, distributing powerful cuffs to the right and left, etc. there are also super blows that slightly take away the life line, you can also use deadly bursts of energy take out all enemies in sight. First, we are allowed to play for four characters, but as mentioned above, thanks to the freedom of movement, more heroes can join your team in a certain area. There are 6 characters in total in the game, they all met by chance, each of them with his own motivation to kick the ass of the main villain, so there are six endings in the game.
‹
›
Home
View web version