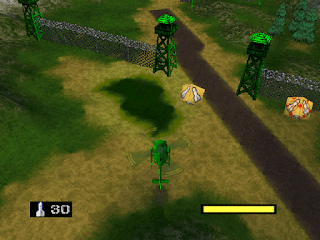 Genre: Action
Gameplay: Shooter
Vehicular: Flight / aviation
Published by: 3DO Company
Developed by: 3DO Company
Released: 2000
Platform: Nintendo 64 (N64)
Army Men: Air Attack has a similar gameplay to the well-known Jungle Strike game. In terms of controls and game mechanics, the game is similar to the same Strike series. As you progress through the game, new helicopters will become available to you, with different characteristics: armor level, maneuverability, weapons and speed. There is an opportunity to choose a co-pilot, he has his own parameters of gun accuracy, missile power and winch. The levels in the game are divided into the plastic world and the real one. The worlds are interconnected by portals. For example, a lifeless teddy bear in the real world becomes a valuable combat attack bear when it passes through a portal to a plastic world. All missions are varied and you will not get bored.
The main plot is pretty standard for the Army Men series. The green and tan armies are fighting each other again.
The game also has a two-player mode. You can play the game together, or arrange a fight with each other.
‹
›
Home
View web version