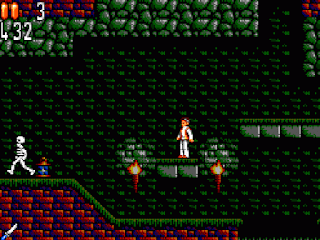 Genre: Action
Perspective: Side view
Visual: 2D scrolling
Gameplay: Arcade, Platform
Narrative: Horror
Published by: Sony Imagesoft
Developed by: Probe Software Ltd.
Released: 1993
Platforms: SEGA Master System (MS), SEGA CD / Mega-CD, Nintendo (NES)
On a dark night, he pursues his victims with the passion of a prince and the grace of a wild cat. He is the Lord of Darkness - Count Dracula - and his eye accidentally fell on your beautiful lover, Mina Murray. Now you, Jonathan Harker, must put a stake into this devil and save Mina, until she becomes the eternal consort of Dracula. A well-made game.
Bram Stoker's Dracula is the name that comes from the movie of the same name released in 1992. The gameplay of the games varies from platform to platform, but the plot is conveyed fairly accurately in all of them. Starring a young lawyer, Jonathan Harker, who must free himself from Dracula's captivity and deal with him.
The DOS version of the game is a first-person adventure game. For 16-bit consoles, this is a common platformer, while in the Game Boy version you have to explore more levels and fight less. And the SEGA CD version boasts a decent FMV.
‹
›
Home
View web version