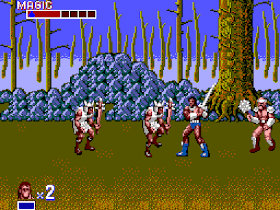 Genre: Action
Perspective: Side view
Visual: 2D scrolling
Gameplay: Beat 'em up
Interface: Direct control
Setting: Fantasy
Published by: SEGA of America
Developed by: Team Shinobi
Released: 1989
Platform: SEGA Master System (MS), SEGA Genesis / Mega Drive, DOS
Who has not heard about this wonderful game? That's right, a few. But it's worth playing! True, the controls are lame, somehow everything is too fast and slow ... Better to play on Genesis ... But that is what it is.
Golden Axe became one of SEGA's biggest hits from the late 80s, early 90s.
In the role of one of three heroes, you need to suppress the arrogant ambitions of Death Adder, an evil Warrior who seeks to conquer the Kingdom and make it a world of Chaos and Evil. Orcs, Skeletons, Giants, Dragon Riders, Knights, and many others are on the side of Evil. However, the Axe, Sword and Broadsword will crush everything.
As for the port on the Master System, then you play as one hero, Tarik, the very one who decorates the Ax Battler game! At the beginning of the game, you can choose magic, which often helps (Attack + Jump), however, I recommend Fire. Yes, it is natural that you will play alone, the second player is not provided. If graphically, and musically, the game looks decent, then its imbalance is somewhat frustrating.
‹
›
Home
View web version