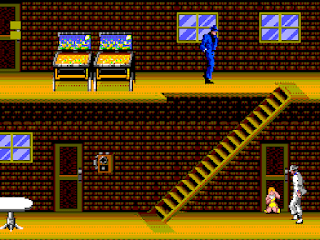 Genre: Action
Perspective: Side view
Visual: 2D scrolling
Gameplay: Platform
Published by: SEGA of America
Developed by: SEGA Enterprises Ltd.
Released: 1990
Platforms: SEGA Master System (MS), SEGA Genesis / Mega Drive
A game for fans of Michael Jackson. In this game, Michael Jackson walks through locations and frees hidden children from bandits. He does it dancing and dancing to his own music. The SEGA Genesis also has a game about Michael Jackson, but the graphics and music are better there, and the levels are different.
‹
›
Home
View web version