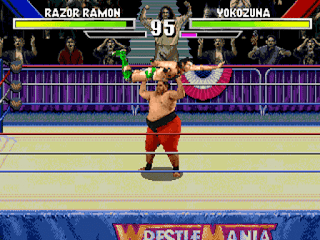 Genre: Action, Sports
Perspective: Side view
Visual: 2D scrolling
Gameplay: Arcade
Sport: Wrestling
Published by: Acclaim Entertainment
Developed by: Midway Manufacturing Company
Released: 1995
Platforms: SEGA 32X, Super Nintendo (SNES), SEGA Genesis / Mega Drive, PlayStation (PSX, PS1), Arcade Machine
WWF WrestleMania Arcade is one of the best arcade wrestling simulators. The game is made by Midway, creators of the legendary fighting game Mortal Kombat, based on the World Wrestling Federation (WWF). Which significantly affected the game itself. Since the game is arcade, in the ring you can do anything that would be impossible to do in a regular fighting game. Instead of blood, each character drops something special. The game features eight characters Bam Bam Bigelow, Bret Hart, Doink the Clown, Lex Luger, Razor Ramon, Shawn Michaels, The Undertaker, and Yokozuna. You can choose one of them and go to conquer a new title. The game has a large number of modes. You can fight one against all. The game has high-quality digitized graphics of characters and a lot of humor that will not let you get bored for a long time.
‹
›
Home
View web version