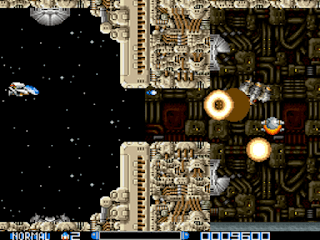 Genre: Action
Perspective: Side view
Visual: 2D scrolling
Gameplay: Shooter
Vehicular: Space flight
Setting: Sci-fi / futuristic
Published by: Irem America Corp.
Developed by: Irem Corp.
Released: 1991
Platforms: Super Nintendo (SNES), Arcade Machine
The main feature of the game was that as a weapon you were given a satellite to help you, which flies with your ship during all missions. The satellite can fly independently, or it can be attached to the front or rear of the ship at the player's request. When attached, it complements the ship in fire support, can serve as a shield against small bullets from numerous enemies and cover the ship from behind. There are several shooting modes in the game, you can pour a burst of water on enemies, or you can save up energy and throw out a powerful charge. The ending depends on the difficulty level and the two-player mode. A more improved sequel to R-Type III: The Third Lightning, was released on this console.
‹
›
Home
View web version