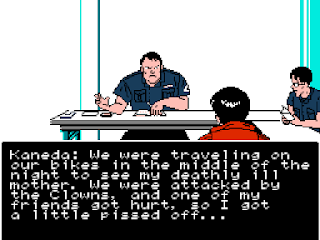 Genre: Adventure
Perspective: 1st-person
Art: Anime / manga
Gameplay: Interactive fiction / text adventure, Visual Novel
Published by: Taito Corporation
Developed by: Taito Corporation
Released: 1988
Platform: Nintendo (NES)
31 years have passed since the end of World War III, now on August 18, 2019. Kaneda and Tetsuo were bikers from the streets of New Tokyo. During skirmishes with rival gangs, during one of the races, Tetsuo practically became the leader of the race, when suddenly his bike suddenly exploded ... Kaneda rushed to his barely living friend, but life in him was almost extinguished. The main character did not have time to figure out anything - soldiers appeared and promptly tied up all the participants in the race. From this moment the game begins.
We need to help the main character Tetsuo go through many difficulties and find out who organized the accident, and avenge the death of his friend.
‹
›
Home
View web version