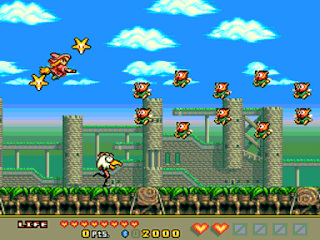 Genre: Action
Perspective: Side view
Visual: 2D scrolling
Gameplay: Shooter
Setting: Fantasy
Published by: Turbo Technologies
Developed by: Quest Corporation
Released: 1993
Platform: TurboGrafx-16 (TG-16)
A very rare and excellent game with a young witch (named Ripple) on a broomstick in the title role. She has 2 "weapons" that are designed to destroy everyone and everything in her path. At the end of each level, as usual, there is a boss. According to the plot, I will only say that you were very curious and, having received the magic book of the teacher by dishonest means, accidentally released six evil demons into your world. Great graphics, great gameplay, funny sound. What could be nicer. At stage (and only 6), you can drop into the store for purchases.
‹
›
Home
View web version