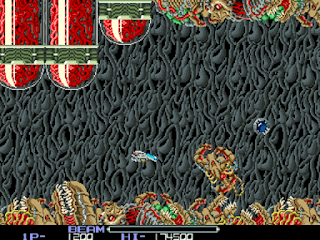 Genre: Action
Perspective: Side view
Visual: 2D scrolling
Gameplay: Arcade, Shooter
Vehicular: Space flight
Setting: Sci-fi / futuristic
Published by: Nintendo of America Inc.
Developed by: Irem Corp.
Released: 1987
Platforms: Arcade Machine, TurboGrafx-16 (TG-16), SEGA Master System (MS)
In this game the player controls a space fighter called R-9 that is characterized by a laser that can be charged to increase the force of impact against enemies and at the same time, with a capsule, called Force that is allowed to anchor to the ship and grants a defined weapon according to the color or letter of the Power-Up that is collected to the following. The power of "Force" increases as more weapons are collected. There are also extras to increase the speed of deployment of the ship, fixed capsules on the roof and under the base of R-9 and homing missiles as an efficient addition to the shot we already have. What most distinguished R-Type from competing games was the novelty of being able to use the "Force" capsule both to attack and to defend against enemy fire and that it could be launched and detached from the ship to use it as a satellite, in addition to free form, which enabled the player to anchor "Force" on the tail of the ship and thus shoot backwards, that is, to the left of the screen. R-Type was the only game that had these characteristics and an impeccable technical section. No matter the number of enemies or their size on screen, R-Type did not slow down or damage the appearance of other objects that were simultaneously moving on the screen. This was a very common mistake in those days but Irem showed his mastery in creating a horizontal shooter without these common mistakes. This last fact is only understood for the original version of the R-Type in arcade machine. The conversions for consoles and computers used to have some flaws but it was because the hardware did not meet the requirements to be able to program a colorful R-Type without slowdowns.
‹
›
Home
View web version