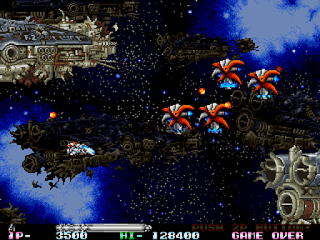 Genre: Action
Perspective: Side view
Visual: 2D scrolling
Gameplay: Arcade, Shooter
Vehicular: Space flight
Setting: Sci-fi / futuristic
Published by: Irem Corp.
Developed by: Irem Corp.
Released: 1992
Platform: Arcade Machine
In the year 2163, humanity is living in peace and has found a new planet to colonize. Thus began the Paradise project, with the sending to the new planet of a super bio-computer, called Major, capable of interacting with the forms of life present and preparing for human colonization. Unfortunately Major has a breakdown and instead of making the planet habitable he populates it with malevolent creatures. The planet has to be "cleaned up" and the super-powered R-9 Leo battleship is set up.

The video game takes place on six levels with progressive difficulty; like the prequels it is very playable and features well-maintained graphics. The enemies are varied and some of them huge. The spaceship is always supported by two lateral pods, called Psybits, which help to fire the weapons, even from the rear, and can be launched at the attack for a short time. It uses a joystick (for moving), and a button (for shooting). There are three lives available, with no hit points.

The spaceship R-9 Leo has many weapons at its disposal, obtainable thanks to the collected colored pods.

The six levels or areas are set on the planet, apart from the first one located in space.
‹
›
Home
View web version