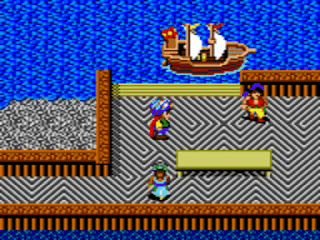 Genre: Role-Playing (RPG)
Perspective: 1st-person
Setting: Fantasy
Published by: SEGA of America
Developed by: SEGA Enterprises Ltd.
Released: 1992
Platform: SEGA Game Gear (GG)
Since ancient times, the world has been an arena of continuous struggle between Light and Dark. People were constantly harassed by the Dark god Ahriman. A young man named Jamseed came out to fight him. Using the three rings given to him by the Wizard of Light, Jamseed nevertheless defeated Ahriman and imprisoned him very far and deep. However, Ahriman instructed his subject, the Snake King Zahhak, to attack the Kingdom of Shanadar, founded by Jamseed. Jamseed was killed, and darkness swallowed the world again. After 1000 years, a warrior named Follidoon defeated Zahhak and brought calm back. And now, when everyone has forgotten about those legends, the evil mystical empire Eflaat wanted to dominate the world. Shanadar once again had to stand up to fight for peace ... You are a prince, a future ruler, and you simply have to protect your land and the whole world from evil forces.
One of the best RPGs on the Game Gear, and I'm very disappointed that there was no sequel on either Genesis or other consoles.
‹
›
Home
View web version