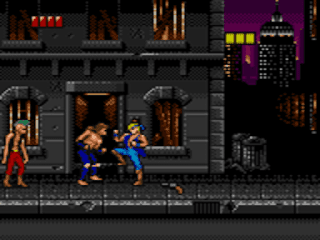 Genre: Action
Perspective: Side view
Visual: 2D scrolling
Gameplay: Arcade, Beat 'em up / brawler
Published by: Virgin Games
Developed by: Virgin Games
Released: 1993
Platforms: SEGA Game Gear (GG), Nintendo (NES), Arcade Machine, Atari 7800, SEGA Master System (MS), Game Boy Advance (GBA)
One of the cult series. Great Beat 'em up! Compared to the NES - this game looks much cooler. So I advise you to choose this one. The sound is not very good, but you don't notice it anymore.
Martial arts masters, brothers Billy Lee and Jimmy Lee again take to the restless streets of their hometown. Their knowledge of street fights makes them walking death machines. Billy's beloved Marian was kidnapped by the brutal Black Warriors street group led by the Boss of Dark Shadow. To free your beloved, you need to kill the leader of the gang. At the same time, along the way, you can teach the steroid hulk Willy a lesson. Knives and barrels are sometimes lying on the street - they help out a lot.
It's bad that there are only 4 levels here. But the game deserves attention. This is what I advise you!
‹
›
Home
View web version