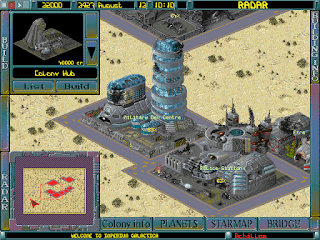 Genre: Action, Role-Playing (RPG), Strategy / tactics
Art: Full Motion Video (FMV)
Pacing: Real-time
Gameplay: 4X, Turn-based strategy
Setting: Cyberpunk / dark sci-fi, Sci-fi / futuristic
Published by: GT Interactive Software Corp.
Developed by: Digital Reality Software Kft
Released: 1997
Platform: DOS
The game combines global strategy, 4X and real-time strategy, and is not fully tactical. At the time of the release of the game, there were no analogues, but nevertheless, the idea was no longer new. Subsequently, games from the Pax Imperia series began to be called an analogue (the closest representative is Pax Imperia: Eminent Domain).
The game has diplomacy (appears the latest), morality, a large set of races, the ability to build buildings and units at your discretion on different planets, which in turn differ in parameters, appearance, relief (however, each planet at the level of its surface is represented by only one small location on it). There is no "generator of Universes / Galaxies" and generally the ability to play against the computer - a scenario, there is no planetary editor (or any other editor).

The structure of the fleet assumed 3 classes of ships: fighter, cruiser, flagship. Each class has its own tasks, as well as the possibilities or restrictions of the type:
For space battles, the 3rd engine was loaded, which made it possible to line up the fleet in battle formations and set orders with amazing accuracy: the flight path of each link of fighters or a large ship with the division of firepower of different types between different targets, for example, lasers for fighters, ion cannons for cruisers , missiles and torpedoes on the flagships.

In the game, it was allowed to build orbital bases, one of them was an orbital factory (the only place that allowed building flagships), similar in behavior to flagship class ships (except for canopies: engine and hold).
Planetary colonies were considered the main ones in the game, which were strongly recommended to be built when free planets were found, since the research ceiling depended on them (in a colony it was possible to build only 1 research institute out of 5 possible types in different combinations, as well as 1 plant of any type out of 3 available) , the wealth of the entire empire (almost entirely from taxes) and the rate of production.
The planets differed in size, type of surface and manipulations with them were carried out using a simplified platforming engine that made it possible to choose a place for any building, taking into account the terrain, in the same engine planetary battles take place.
‹
›
Home
View web version