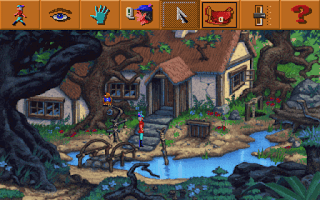 Genre: Adventure
Perspective: Side view
Gameplay: Graphic adventure, Puzzle elements
Setting: Fantasy
Published by: Sierra On-Line
Developed by: Sierra On-Line
Released: 1990
Platform: DOS
The game was developed using a new game engine - SCI 1.0, due to which it had significant differences from the previous parts in graphics and interface. For the first time in the series, the VGA mode appeared - game locations were drawn in 320 × 200 resolution and used 256 colors. It was the first game from Sierra to interact with the player through a point-and-click interface that used icons to perform various actions (the so-called icon based interface). This interface replaced the old one, which used text input from the keyboard (as in text quests), which entailed the outrage of some hardcore fans of the series, who preferred the old way of control. However, the player could easily get by with only the keyboard - the engine provided for emulation of mouse movements using the arrow keys, since then mice had not yet become a standard PC accessory. It was one of the first high-budget games, with over a million dollars spent on development . 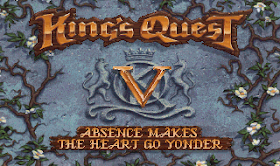 In 1991, a "talking" version of the game was released on a CD, where all the characters were voiced, and the main character of the game - King Graham - turned out to be a very young and well-built man for his age (probably due to the fact that in the previous game he was fed with rejuvenating apples). An NES version of the game was also released. It was one of the first computer games to be released on CD. MIDI in-game music was written by Mark Seibert, Ken Allen, Rob Atesalp and Chris Brymen.

In the intro, the player sees a panorama of the royal castle of Daventry on a sunny day. Suddenly, a mysterious figure in a cloak with a staff appears, the castle is engulfed in a magical whirlpool and disappears. The only member of the royal family who escaped the abduction was King Graham himself, who was walking around the castle at that time. Returning from a walk, Graham, discovering the disappearance of the castle, and meets a talking owl named Cedric. The owl - an accidental witness to the abduction - tells the king that the cloaked figure is the evil and powerful sorcerer Mordack, who stole the castle and the king's family with the help of his black sorcery. Graham and Cedric travel to the country of Serenia, where Cedric's master, the good sorcerer Crispin, lives. Crispin helps the king with advice, gives his magic wand and gives him a piece of a white snake, eating which Graham gains the useful ability to talk with animals. Then the king and Cedric set off on a journey.
Graham later learns that Mordack is the brother of the sorcerer Mannanan, whom Prince Alexander (the king's son) turned into a cat in the third game of the series. Obsessed with revenge, Mordack stole the castle, and threatens to feed the royal family to the cat (i.e. Mannanan) if Alexander does not return his brother to human form. Traveling around the country, helping animals and people, King Graham will gradually find his way to the castle of Mordack and, having defeated the sorcerer in a magical duel, will return his family nest and loved ones.

Relationship with other games in the series

Queen's Quest V is the first game in the series to have events directly motivated by the storyline of a previous game. Usually, new characters that a player meets in one game can become important in the next. For example, Rosella, who appeared in the third part, becomes the main character of the fourth and seventh parts. But in this part, the plot is directly related to the plot of the third - the transformation of Mannanan into a cat was necessary to complete the third part, and the consequences of this act are the driving force of the fifth plot.
The ending of King's Quest V is tightly woven into the plot of its sequel - the sixth part of the series. At the castle of Mordack, Graham meets Princess Cassima, Mordack's maid. Mordack kidnapped Kassima and, after she refused to marry him, made her his servant. Kassima rescues the king from the dungeon. After the victory, Prince Alexander promises Kassima to visit her in the Land of the Green Isles, the homeland of Kassima, which is the plot of the sixth part. Kassima mentions the Vizier who introduced her to Mordack. In the sixth part, we learn that Mordack and Vizier (the main villain in this game) are both members of the Society of the Black Cloak. Even the melody that accompanied Kassima's appearance in the castle, in the sixth movement, after a slight revision, became the main musical theme of the love of Alexander and Kassima.

The release of SCI version 1.0 was a "response" to its main competitor - SCUMM from LucasArts. SCI 1.0 represents the next step in the development of the quest interface - instead of a dozen SCUMM verbs, it offers only five action buttons, the selection of which changes the appearance of the pointer. For example, pressing the "look" button turns the pointer into an eye icon, selecting an item from the inventory into an image of that item, and so on.
Otherwise, the gameplay is standard for quests of that time: the player controls the movements of the protagonist across the screen, traveling around the game world, communicating, collecting and using various items that can interact both between the crash and with other objects and characters. The process of communicating with other characters in the game is non-interactive and is only necessary for the presentation of the plot (there is no choice of answer options). During a conversation, a detailed portrait of the character usually appears, and sometimes a detailed image of the conversation scene. There are no obvious puzzles in the game - most of the puzzles are woven into the plot. A specific puzzle is the exploration of the desert, as well as the labyrinth.
‹
›
Home
View web version