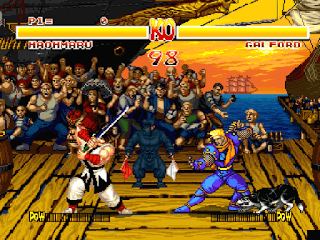 Switch "Samurai Shodown fix" to Enabled and restart emulator.
Genre: Action
Perspective: Side view
Visual: 2D scrolling
Art: Anime / manga
Gameplay: Fighting
Setting: Japan (Ancient/Classical/Medieval)
Narrative: Martial arts
Published by: Crystal Dynamics
Developed by: SNK Corporation
Released: 1994
Platforms: 3DO Interactive Multiplayer, Neo-Geo, SEGA Genesis / Mega Drive
Samurai Shodown is a popular fighting game, the main feature of which is the use of various melee weapons during the battle, which can be lost in the midst of the battle. The Panasonic 3DO version, port of which Crystal Dynamics handled, is considered the best port made from the original Neo-Geo game. The game has been completely ported and uncensored, coming to the console with gore and the ability to cut characters.
In early feudal Japan, a man named Shirou Tokisada Amakusa preaches the religion of a heretic. Few people know that Shirou Tokisada Amakusa is indeed the servant of the sinister Ambrosia who possessed him. Ambrosia wants to plunge the world into darkness.
Now you are one of 12 warriors fighting for the honor of destroying the Amakusa and completing the mission.
There are 12 characters in total in the game, plus 3 bonus characters. During the battle, you can also interact with objects, destroying them. Each character has his own unique weapon, his own combo attacks, and even animals come to the rescue of some of them. The game has scaling.
‹
›
Home
View web version