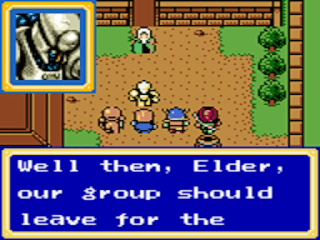 Genre: Role-Playing (RPG), Strategy / tactics
Perspective: Top-down
Pacing: Turn-based
Setting: Fantasy
Published by: SEGA Enterprises Ltd.
Developed by: Sonic Co.
Released: 1995
Platform: SEGA Game Gear (GG)
Everyone knows about the three games in the Shining series for the SEGA Genesis console! More sophisticated players and fans have made it to the Shining Force CD (compilations of portable Shining Force Gaiden and Shining Force: The Sword of Hajya). However, I'm sure very few people have come across one of the most interesting from the point of view of the plot and the connection between the first and second Shining Force, a game for the Sega Game Gear, which was never officially translated into English. In Shining Force Gaiden: Final Conflict, we will meet our favorite heroes and villains, visit familiar places and look at the universe from a slightly different angle. Through the efforts of the fans, this unknown chapter about the Shining Force has nevertheless become available in the language understood by the majority of the population of planet Earth, and now we can enjoy it. And in order for you not to miss something important and not experience any special difficulties, this walkthrough was written. Hope you find it useful!

The forces of darkness, the armies of Runefaust and Dark Dragon were defeated and destroyed when they tried to conquer the whole world. In spite of everything, Max led the squad known as the Shining Force and led him to victory over the darkness. Peace reigned again, however, a new enemy is ready to unleash its forces on people and avenge Dark Dragon.
You see how several people run into the dilapidated temple. It turns out these are the surviving minions of the Dark Dragon. And the witch Mishaela herself leads them! Max rushes in behind them, accompanied by Adam's robot and several other friends. The protagonist of the first Shining Force once again gathered a small squad to fight evil. Max says it took a long time to chase Mishael, but now he found her. The witch replies that if Max has a case, then it must be resolved as soon as possible. Unfortunately for the hero, she is not the same old Mishael that he defeated before. One of her associates, Lynx, says the witch shouldn't worry. He is there and she can always rely on him, and not get her hands dirty about you herself. Mishaela tells Max that it looks like he came after her to destroy her dreams, so he will have to die.
The villains are removed, and only Lynx remains in place, he calls on the Shining Force to show what they are capable of. Max says you can't miss the witch, so the squad will have to split up. He sends Adam and the centaur Mead in pursuit of her. The robot asks two more friends to go with him - the warrior Paig and the archer Sonette. Meanwhile, a battle breaks out between Max and Lynx. The villain realizes that our hero is stronger and is trying to hide, but the old warrior Ridion, who has bypassed the enemy from the rear, does not allow him to do this. However, with the help of a deceptive maneuver, Lynx still escapes, and Max urges his friend to hurry to help Adam and the others.
At the same time, the second half of the squad is catching up with the witch. The robot tells Mishael that her anger and rage are useless, and he will end her soon. Adam attacks the enemies with his laser cannon, but they manage to run away. The witch declares that it is not so easy to kill her now. She orders her companion Eiku to destroy those who stand in their way. The magician tells Adam that he is only following orders, so nothing personal. He attacks the robot with level 3 Blaze magic. Now the witch and her minions have time to retreat.
The newly united detachment resorts to the aid of Adam. Max asks his friend if everything is fine with him, but he can't even answer. The hero asks the soldiers to stay here and help the robot, and he, together with Ridion, will go after the witch. Friends protest, however, after Max's words that someone will need to take care of Adam, they agree. Two Shining Force warriors catch up with Mishael, but she assures you that you cannot stop her. The witch casts the Spark spell and a powerful lightning strikes the heroes. Before they wake up, Mishael asks Magus to destroy part of the temple wall so they can get out, which he does. The witch squad is hiding, but Max and his partner are already on their feet. They set off in pursuit of Mishael to prevent her from carrying out her cunning plans.
In the next scene, we see that the remaining warriors brought Adam to the port of Hassan. If you remember, the heroes of the game Shining Force II will visit this small city on the continent of Parmecia, but already abandoned in the future, and meet Rohde, a crazy historian who dreams of finding the legendary Caravan. It turns out that, despite all the efforts of the Elder and the early repair, the robot will no longer be able to fight on a par with the others, so he decides to gather a small detachment of strong warriors capable of attacking the trail of Max, who went in pursuit of the witch. A trio of familiar characters from the opening scene arrive at the Elder's house. Friends are worried about Adam, but he assures them that everything is in order with him and the self-healing system built into his body may not allow him to fight as before, but certainly will not leave him a useless piece of metal, unable to help his friends.
Just then the magician Hawel (who, by the way, is the father of Chaz from Shining Force II) is in time and calls on the warriors without waiting for Knuckles to go on a campaign. Friends were already about to move, as a couple of new characters appear. This is the granddaughter of Elder Cynthia and the young warrior Ian, who needs to talk to him about something. The elder sends them to the house and reveals that Ian got lost on his journey and accidentally wandered into Hassan. He thinks the warrior also has something to say to Adam, but he will have to wait for you to return. At the gates of the city, the detachment, ready to go, overtakes the monk Knuckles who slept through everything in the world and joins you and the friends led by Adam finally go on a campaign.