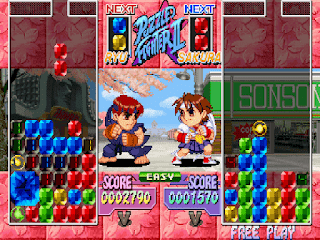 Genre: Puzzle
Pacing: Real-time
Gameplay: Falling block puzzle
Published by: Capcom Entertainment
Developed by: Capcom Co.
Released: 1997
Platforms: PlayStation (PSX, PS1), Arcade Machine
Super Puzzle Fighter II Turbo is an extremely successful combination of Street Fighter and Darkstalkers in the puzzle game genre of Tetris. Try to keep your side clean - your success depends on how many "block groups" you "sweep" with one blow (to the opponent's side). The transformed versions of the fighters look great, but the sound design is pale and does not always match the character of the characters. As a puzzle, Puzzle Fighter is still good - especially in the version for two players. So fans of this genre (as well as Street Fighter) will be very pleased.
‹
›
Home
View web version