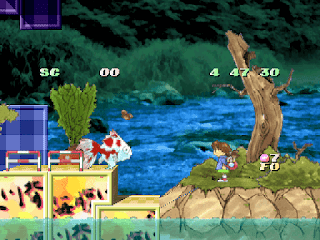 Genre: Action
Perspective: Side view
Art: Anime / manga
Gameplay: Platform, Puzzle elements
Published by: Xing Entertainment
Developed by: Jackpot, Japan Clary Business
Released: 1997
Platform: PlayStation (PSX, PS1)
Umihara Kawase is a series of platform games about a Japanese schoolgirl with a bright pink backpack, who finds herself in a strange underwater world full of fish and some strange creatures (what kind of fish can have legs?). The game originally appeared on the SNES in 1994 and has since been updated with PlayStation versions. Umihara Kawase Second Edition is a 1997 re-release of the game and has five additional levels (here called "field") for a total of fifty-five levels. There are other differences as well. The gameplay differs from the usual platformer and is a bit like the Pitfall game, because it requires a certain skill and intelligence from the player to solve the decision how to complete the level using only a rope with a hook that is at the disposal of the main character and no bonuses to facilitate the passage. The game (more precisely, the series as a whole) has the status of a hardcore game (that is, difficult to complete), but nevertheless has a number of its fans. Among other things, the game has a wonderful musical accompaniment and the ability to replay in order to improve the passage time or search for hidden places that were previously inaccessible or you simply did not notice them.
‹
›
Home
View web version