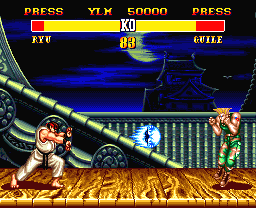 Genre: Action
Perspective: Side view
Visual: 2D scrolling
Gameplay: Fighting, Martial Arts
Art: Anime / Manga
Published by: Capcom U.S.A.
Developed by: Capcom Co.
Released: 1993
Platforms: SEGA Genesis / Mega Drive, Arcade Machine, SEGA Master System (MS), TurboGrafx-16 (TG-16)
An excellent fighting game. Many believe Street Fighter about the parent of the genre. That the names from him began to flourish this genre. Street Fighter II: Special Champion Edition is the same as Street Fighter II on Arcade machines, but more improved. There were a lot of innovations, including the ability to choose the same characters. In the game there is a fight of street fighters from all corners of the earth, including from the USSR (Russian Zangiev), although at the time of the exit the Soviet Union had long since disintegrated, it was decided to make a character from the USSR and not from Russia or even some other CIS country. Since at that time the USSR knew, and many did not hear about Russia, since it was a young country. But the answer is much simpler, the game concept was developed back in 1990, and was not updated in the final output. For the title of the best fighter. You also have to take a share challenge, and show who is still the best street fighter. The game features 12 characters among which there is only one girl - Chun Li from the China.
‹
›
Home
View web version