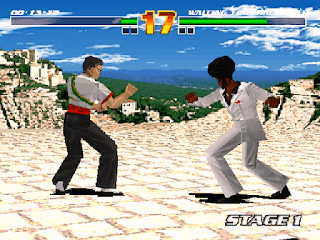 Genre: Action
Perspective: 3rd-person
Gameplay: Fighting
Published by: Agetec
Developed by: ASCII Entertainment Software
Released: 1999
Platform: PlayStation (PSX, PS1)
In this editor game, you can "write" your Virtua Fighter or Tekken 3 and amaze with your creation, if not the whole world, then your friend for sure, and then also fight with him to finally prove not only your genius, but also your strength, More specifically, finger dexterity. Fighter Maker is a very powerful editor with a lot of features, but in order to achieve something worthwhile in this game, you have to learn a lot, first of all, the features of the editor, then decide on the appearance of your fighter, and finally start creating a killing machine, choosing from a variety of martial arts styles presented in the game (more than 20). "Great fighters can be created, not born!" - this is the concept of the game Fighter Maker. This editor game is a worthy addition to the "Create Your Own Game" series from ASCII Entertainment. You can endow your hero with strong arms and legs, collecting his powerful body literally piece by piece, while not forgetting the little things like hair color or skin color. But that's not all - you can determine the sequence of certain strikes and powerful combos, the fighting style, as well as the poses of the fighter, his mobility and intelligence. In total, more than eight hundred parameters can be changed in the editor, not only those that were mentioned above, but also camera angles, visual and sound effects (for each movement of a fighter), animation framing - all this you can save to a memory card and fight for 10 ty available locations. Visually, the game looks great, and the ability to view different moments from different camera angles at any time is impressive. The music track is a bit sintemental for fighting games, but very pleasant and not annoying at all.
‹
›
Home
View web version