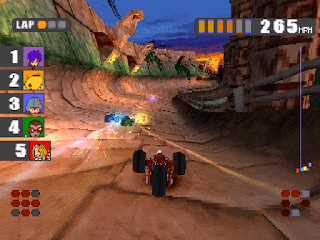 If the control keys stop responding on Paused screen - switch "Pad 1 Type" to Analog and then to Standard.
Genre: Action, Racing / driving
Perspective: 1st-person, 3rd-person
Art: Anime / manga
Gameplay: Shooter
Setting: Sci-fi / futuristic
Published by: Sony Computer Entertainment Europe Ltd.
Developed by: Attention to Detail Limited
Released: 2002
Platform: PlayStation (PSX, PS1)
This game is similar in many ways to Psygnosis's popular Rollcage series (from the same developer). The player takes control of one of five cars in a futuristic race where speeds can reach over 400 miles per hour. Weapons and defenses are used to help the player win races. The main game mode is a 1 player mode in which the player can race on 25 tracks in 5 different worlds (Archipelago, Droid Gardens, Sky Dunes, Skyport and Cloud City), if playing alone is boring, you can play together on a divided screen. Firebugs is one of the last games published for the first PlayStation, and considering that many of the last games were rather hacky products, we must pay tribute to the developers, the game is made to last - stylish and beautiful graphics, convenient controls and a sufficient number of game modes, all this makes the game great fun.
‹
›
Home
View web version