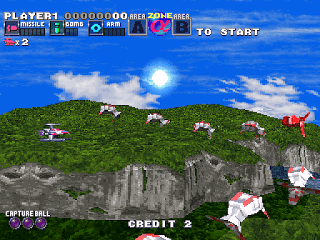 Genre: Action
Perspective: Side view
Visual: 2D scrolling
Art: Anime / manga
Gameplay: Shooter
Setting: Sci-fi / futuristic
Published by: THQ Inc.
Developed by: Taito Corporation
Released: 1998
Platform: PlayStation (PSX, PS1)
The main requirements for a shooting game can be easily listed with the fingers of one hand - these are good ships, bad ships, big bosses, all sorts of good things that strengthen your ships, as well as various and difficult levels. The game G-Darius has no particular claims and does not try to get off the beaten track. It's just a good old arcade game with a lot of action that shows you the full power of its madness. We will not spend much time telling you about how you managed to take possession of a powerful spaceship, why you decided to fight the scum of space, you do not need to know all this, because it is not important for your results in the game does not affect in any way. What is really important in the game is that you start the game with a single laser, which can be recharged a few seconds before you are attacked by the first portion of enemy robots flying towards you across the screen. After that, it begins to develop more and more active action, from which you will get a lot of satisfaction. Your ship has a lot of components that can be upgraded, from standard weapons to secondary defense systems, which usually consist of rockets or bombs. When the action gets too tough for your standard weaponry, then you can use a mighty energy beam that will pierce your target and incinerate them. While G-Darius doesn't have the insanely stylish charm that Einhander had, this game is still a pretty serious contender as there are some quite interesting moves in the game that are sure to play their part in the evolution of the game. So, for example, if at some point you are dissatisfied with your own firepower, then you can shoot down capsules that are attached to enemy ships, and then grab them and drag them along like a caught fish. When they submit to you, they will fly very close to your ship and quite actively shoot at their buddies. Did we mention fish? Oddly enough, but she (the fish) does play a rather important role in G-Darius, since almost all the big bosses here are fish. And they are just huge! You'll always know when you're in for a really tough fight as an alert will appear on the screen, flashing like a harbinger of death, after which you'll be formally introduced to the gigantic monster before you burn it or it will destroy you. In order to finish off each of the bosses you will need quite a lot of time, among other things, you must admit that you always need to knock out many parts of the boss before he is finally destroyed. The game is played in parallel mode for two players, so if you need help, you can always count on your friend - keep in mind that staggering from side to side and stealing extra lives from a friend is completely unfair. The best thing about this game is undoubtedly the continuous attacks of the enemy, which do not stop for a second until the level is over. Due to the fact that the game is structured in such a way that all levels are different in it, you constantly find yourself in absolutely impossible situations - from fire to fire. All this is explained by the fact that the levels are very often divided into two parts and you have to choose your fate by placing the ship either below or above the line that divides the screen. In addition, after you complete this level, you are again prompted to choose your next destination from two options. As a result, all points of your route are a binary tree - it must be admitted that by doing so the game acquires much more depth than one might expect. Despite the relative simplicity of G-Darius, this game is made by very well-known arcade masters Taito. The main admiration goes to the two-dimensional landscape in which most of the action takes place, but it should also be noted that all levels twist and turn like a Rubik's cube. In an instant, your calm flight can be interrupted, you will have to change direction and repel a terrible attack of the enemy, who has firmly decided to finish you off. The background is constantly moving, giving the game a highly polished 3D sheen that acts as a constant reminder that despite the game's rather anachronistic mechanics, this game is not at all anachronistic. The graphics and sound in this game are of the highest quality, but it is the insane shooting, from which nothing distracts you, that makes this game a very good hit. Maybe, of course, this game will not be to everyone's taste, but in fact, it has something like a rocket that gets out of the dungeon of its genre and, flying at high speed to the zenith, explodes there, illuminating the whole world with its radiance . Fans of this genre will hardly need to be persuaded, they will very quickly run to lend money to this game, while any open-minded gamer will have to admit that there are few games more intense and aggressive than this, which have such cool pyrotechnics and the presence of such convincing lasers.