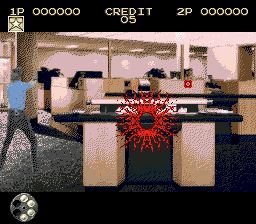 Genre: Action
Perspective: 1st-person
Gameplay: Arcade, Rail Shooter
Published by: Konami (America)
Developed by: Konami Co.
Released: 1993
Platforms: SEGA Genesis / Mega Drive, PlayStation (PSX, PS1)
Shooting from the first person, ported from systems using a light gun. In the SEGA version, the gun was replaced with a sight that needs to be controlled with a cross. At first it is unusual, but then quickly adapt.
It's hard to find fault with the schedule - it's almost like a movie. Even better! Shootings in the Chinatown, the pursuit of bandits by car, the capture of terrorists by the airport, diversion at a chemical plant. Yes, what's there to do? Straightforward work is not for an ordinary policeman, but a minimum for a battalion of special forces. It is not recommended to kill hostages and ordinary local residents, because You can be forced to pass the level anew or lower in rank.
Lethal Enforcers (1993) - Playing for a policeman, them, you have to go through different parts of the city and neutralize it from crime.
Lethal Enforcers 2 - Gun Fighters (1994) - The idea is the same, but all actions take place in the Wild West.
‹
›
Home
View web version