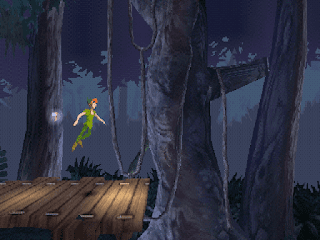 Genre: Action
Perspective: 3rd-person, Side view
Published by: Sony Computer Entertainment America Inc.
Developed by: Doki Denki SA
Released: 2002
Platform: PlayStation (PSX, PS1)
A magnificent colorful game from the Disney studio, created based on the cartoon of the same name, all from the same studio. You will play the role of Peter Pan or his assistant Tinker Bell and go through more than 20 levels filled with jumping, puzzles, racing and fighting. The game is characterized by bonus and hidden stages, special modes for the best players, great graphics with bright colors inherent in Disney games. At the same time, the game is designed so that even the smallest can play it.