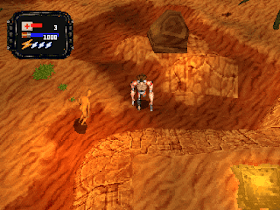 Genre: Action
Visual: Isometric
Gameplay: Shooter
Published by: Interplay Entertainment Corp.
Developed by: Gremlin Interactive Limited
Released: 1996
Platform: PlayStation (PSX, PS1)
This game is intended primarily for fans of the famous sci-fi action movie Loaded. Gremlin Interactive made them a present – ​​a continuation of their favorite game! With the main villain - F.U.B (Fat Ugly Boy), who threatened to destroy the world and defeated in the first series, an amazing thing happened: his brain somehow survived, traveled around the universe and found refuge on a certain planet inhabited by artists and hippies. There he was picked up by one raging Picasso and immediately turned into C.H.E.B (Charming Handsome Erudite Bastard), who, of course, wants to destroy the world again. Unfortunately for Loaded fans, the chic heroine of this game,  (Queen of Sound), has left the game screen, but two new heroines have taken her place. The first of them - The Consumer - is so named because it devours people - living and dead. A whole rocket launcher has grown on her back, so her back hurts a little; but she can freely tear a person apart and use some bone as a toothpick. The second "lady" - Magpie - no less "pleasant" person; she is also not very kind to people, using her trusty gun - Mother Superior. Her victims fall victim right and left.
In general, the blood in this game flows like a river (perhaps, in this matter, the developers remained true to the spirit of the game Loaded). From people every now and then there is literally a bunch of giblets. However, the developers have tried so that Re-Loaded does not turn into a senseless massacre. With the people you meet, you should not only and not how much fight, how much to talk. Some of the conversations will give you valuable tips and guidance on how to get through your hectic computer life as quickly as possible.
Compared to the previous game, the enemies in this game are much stronger, so you need to pass the levels more carefully. Levels with a lot of shooting are short and infrequent. Much more often you have to solve various puzzles. The areas in which the action takes place are very diverse. From the tropics, you are transported to city streets, then to a monastery, where monks throw grenades, wield small arms, or even just score in hand-to-hand combat.
The final task, in truth, does not look very appetizing. You need to destroy the giant - mutant C.H.E.B, tied to the table. You have to crawl all over his body, shooting at his eyes, nose, teeth, and other parts ... Lesson is not for the squeamish.
All in all, the new game maintains the glory of Loaded by bringing many new adventures to its fans. Elements of interactivity (switches, moving stones), movie portraits of characters, very good graphics and sound, a simple and effective control system - all this is at a fairly high level. True, some may find the game too slow and drawn out, especially when the screen is overflowing with characters and furnishings.