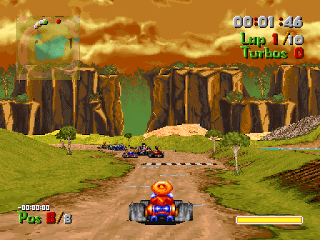 Genre: Racing / driving
Perspective: Behind view
Gameplay: Arcade
Vehicular: Automobile, Street racing, Vehicle simulator
Published by: Ubi Soft Entertainment Software
Developed by: Vivid Image
Released: 1996
Platform: PlayStation (PSX, PS1)
This game is a kind of continuation of the comic car racing from the game "Super Mario Cart", released in 1994 and enjoyed great popularity among the owners of 16-bit Super NES and SEGA Genesis devices. For the uninitiated, let's explain that this is not a very difficult competition of comedic characters, each of which has its own special car. So, a pilot with a monocle, Helmuth von Poyntenegger, drives onto the track in a kind of three-winged car that can even fly some distance; fat man Sumo-san - on a bizarre "map" with blue caterpillars, etc. Each character also has their favorite tracks (and there are 28 tracks in total in this game). Races are held with a wide use of various tactical (but not "tactful") tricks, bombs and other pranks.
The most attractive is a special mode in which eight players can compete at once! Gather your friends, insert a multi-stick and play - either four or eight. In this case, the screen is divided into the appropriate number of parts (both horizontally and vertically), but the image remains perfectly clear. If you still have a load in your eyes, then you can switch to Micro Mode and watch the race from a bird's eye view, which is equally convenient (or equally inconvenient) for everyone.
In principle, the game has three main modes: martial arts (Head-toHead), training (Practice) and the championship (Championship) with the presentation of Bronze, Silver, Gold and - the most expensive - Platinum Cups. When the main mode is completed, players get access to other benefits: secret tracks, etc. After the end of the race, it is very pleasant to scroll through the entire race from the very beginning in Playback Mode, watching it from different angles. Throw in Sudden Death laps, Endurance racing, and your computer-controlled rivals are instantly responsive to your driving style and can put a real test of skill even for an experienced racer - and you've got an idea of ​​the bouquet of entertainment that Street Racer promises you!

Go to the Options screen, then scroll down and highlight Cup Password. You can then enter the following codes:
TRAFIK - Silver Cup;
NEJATI - Golden cup;
DOUGAL - Platinum Cup*;
TURGAY - Secret Options Screen**;
* By entering the password DOUGAL, you get access to the brand new Rabbit car, which has three brand new personal tracks.
** By entering the password TURGAY, you will have access to the Secret Options Screen, which allows you to turn weapons on and off, remove other vehicles, and much, much more...
‹
›
Home
View web version