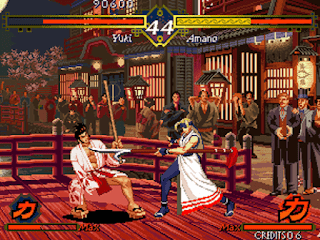 Genre: Action
Perspective: Side view
Visual: 2D scrolling
Art: Anime / manga
Gameplay: Fighting
Interface: Direct control
Setting: Japan (Modern/Futuristic)
Published by: SNK of America
Developed by: SNK Corporation
Released: 1998
Platforms: Neo-Geo, PlayStation (PSX, PS1)
This is a pretty strong project in its genre. The splash screen makes for a spectacular introduction to the game. There are twelve fighters here. Each has its own unique weapon. The game is breathtaking with its dynamics. Before starting battles, you choose what your fighter will specialize in (strength or speed). A variety of techniques make all battles spectacular. Each soldier's life consists of a double line. Despite this, the battles do not drag out for long. All stages are very nicely drawn. Musical accompaniment is performed by Japanese masters of their craft.
‹
›
Home
View web version