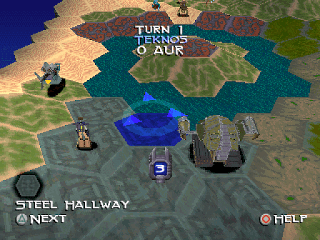 Genre: Action, Strategy / tactics
Perspective: 3rd-person, Top-down
Gameplay: Arcade
Setting: Sci-fi / futuristic
Published by: Crystal Dynamics, Eidos
Developed by: Toys for Bob Inc.
Released: 1998
Platform: PlayStation (PSX, PS1)
This game was created by the man who gave the world the famous Star Control series - Paul Reiche III. This time we will again see a mixture of action and strategy. However, unlike the previous projects of the author, the action elements here are not in the form of space battles, but a fighting game in a fantasy world. The Unholy War can also be reminiscent of Archon in its concept. It is about who will get the power over the whole world. Two races enter the fight - Technos, who base their civilization on the use of high technologies, and Arcanes, who prefer powerful spells. To achieve victory, rivals are ready to resort to any measures. The gameplay is that you move a group of warriors around a fantasy land divided into hexagonal cells, similar to how it happens in turn-based strategies. Get ready for the battles to take place in real time. Each of your soldiers has its own set of parameters, which include agility, strength, health, weapons. The last of the characteristics is the most important for achieving victory. Warriors have two special moves in their arsenal. For example, close with a shield, use small arms, and so on. It should be noted that the strategic element in the game, which the developers themselves advertised, is not deep enough and quickly disappoints. True, this does not mean that she herself is not interesting. There is a second mode of its passage - Mayhem Mode. This is an abbreviated version of the main game, and it consists in battles between warriors one on one. As in the case of the main mode, you can try your hand both in the fight against the prefix and against your friend. The choice of characters and arenas is possible. The control of the fighters is quite responsive. For the most part, the game's characters are well balanced, you can find the strongest of them, as well as a reception for all occasions in life (although there are some mistakes here). The game can by no means be called an arcade game, so it takes a significant amount of time to immerse yourself in it and appreciate it.
‹
›
Home
View web version