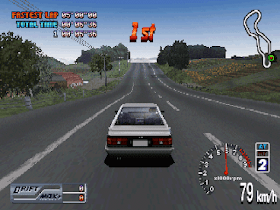 Genre: Racing / driving
Perspective: 1st-person, 3rd-person
Gameplay: Arcade
Published by: Atlus
Developed by: Cave
Released: 2000
Platform: PlayStation (PSX, PS1)
The third and final game in the Touge series to be released on PS1. The menus and signs in the game are in English, and in Japanese only the story mode. Taking into account the quality of the first game, which did come overseas, it remains unclear why this game never went beyond Japan, because the physics here are quite sane, made for drifting, there are many well-executed Japanese auto brands Mazda, Nissan, Mitsubishi to choose from , Subaru (and they are presented in the game under their own names!), several different tracks, which of course are inferior to other games in brilliance, but still quite authentic. The only downside is that there is only one opponent and that one is some kind of cheater - it’s worth crashing once and you won’t catch up with him. Progress compared to previous games is evident.
‹
›
Home
View web version