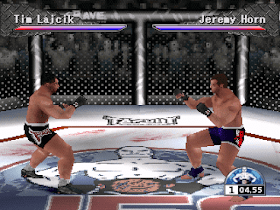 Genre: Action, Sports
Perspective: 3rd-person
Gameplay: Fighting
Sport: Boxing, Wrestling
Published by: Crave Entertainment
Developed by: Opus Corp.
Released: 2000
Platform: PlayStation (PSX, PS1)
The UFC tournament of the same name is the largest event in the world of martial arts, which brings together representatives of different schools, organizations and styles in the ring. All of them fight according to the same rules and can use the entire arsenal of their abilities, from simple punches and kicks to grabs, throws and wrestling on the ground. Ultimate Fighting Championship is the first game released under the auspices of the UFC. It opens the curtain and allows you to play for real-life fighters, compete in the ring and prove your strength to both a live opponent and advanced AI.
‹
›
Home
View web version