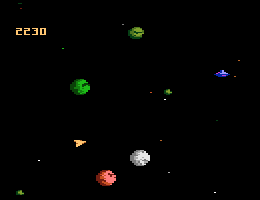 Genre: Action
Perspective: Top-down
Visual: Fixed / Flip-screen
Gameplay: Arcade, Shooter
Interface: Direct Control
Vehicular: Space Flight
Setting: Sci-Fi / Futuristic
Published by: Atari Corporation
Developed by: Atari
Released: 1987
Platforms: Atari 7800, PlayStation (PSX, PS1)
Your space ship is in a very dangerous vicinity of the collision, flying into the asteroid field! Virtuosly evading, and splitting stones into smaller pieces, you need to pave your way to freedom. Seeing that you are in trouble, sometimes fly up the plates of aliens, to help, or rather, to finish you off. It will be difficult. In extreme cases, use a hyperdrive.
Atari released a black and white vector version of the game in 1979-80, both Asteroids and in 1980/81, the color version of Asteroids Deluxe.
Atari 7800: The doomed console had not so many original games, but for it made several unique versions of classic arcades. Other such asteroids you will not find. Improved graphics, a fantastic mode of simultaneous playing together, an exciting arcade action enthralled. Color, rotating asteroids look 3D, and they can even distinguish craters. Plates of aliens were also not deprived of attention. Highly recommend.
‹
›
Home
View web version