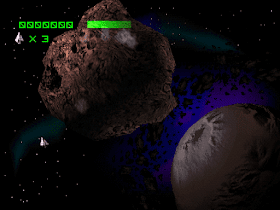 Genre: Action
Perspective: Top-down
Visual: Fixed / flip-screen
Art: Video backdrop
Gameplay: Arcade, Shooter
Setting: Sci-fi / futuristic
Published by: Activision
Developed by: Syrox Developments
Released: 1998
Platforms: PlayStation (PSX, PS1), Atari 7800
Gamers of "old age" certainly remember this game, and now the company Activision "dressed" the old script in modern forms. A polygonal Asteroid and stunning lighting effects have replaced outdated (by today's standards) vector graphics, and a great music track has replaced the outdated sounds coming from your speakers. The changes also affected the controls, now the game supports analog control. In Asteroids you will find five interactive worlds, on each of which you have to go through fifteen levels of difficulty. It will not do without alien aliens, with many of whom you will have to fight not for life, but for death, in order to save life on Earth. Despite the updated look, this is still the same Asteroid, and what is now commonly called casual games (or games for a short pastime) with all the consequences.

Of course, the first episode can not be difficult - your task is to simply destroy all the asteroids, after that you can move on to the next level. The most dangerous here will be small flying saucers for you - it is best to teleport from their shots. Also try to deal with the small blue crystals as quickly as possible until they return to their original size.

The appeared "black hole" attracts a lot of all sorts of garbage, including dangerous for transport ships. Clear the environment from asteroids and the wreckage of old ships, and the task can be considered solved. Beware of steel meteorites, they cannot be destroyed, you can only slightly change the direction of movement. It is also not recommended to stand in one place for a long time, otherwise you will be pulled into the center of the hole. If there is no other way out, and you don’t want to teleport because of too many objects in space, just fly through the "black hole" at maximum speed - you will die if you stay there for a little longer.

The Poseidon Corporation has hired you to clear this area of ​​unwanted activity. Since very strange phenomena occur here, this place has also attracted aliens. The main danger is the ships and crystals of the Ancients - they can reflect the energy directed at them, so never shoot them at close range. Also, try not to hit the prominences - touching them is deadly for your ship.

The Armed Forces of the Earth send you on an ordinary task of cleaning the track from debris, and you stumble upon the home of the Aliens. It looks like this is a trap and you were set up on purpose. And the only way to return home is to completely destroy the alien colony. Avoid approaching asteroids with alien embryos - after the destruction of the "cradle" such a "child" pounces on you, and it is better to have more room to maneuver. And I generally recommend staying away from the Queen - it's impossible to destroy her, it's easier to hide at the bottom of the screen.

It looks like the situation is out of control. It is not known who needs it, but someone is blocking your radio communications with the base, you cannot warn the Earth government of the danger. It can be seen that there is no other way out, and the mission to save the Earth from the alien invasion falls on your shoulders. It turns out that after the destruction of their home world, the Aliens sent you one last hello: a targeted asteroid attack on our planet. And since they didn’t watch Armageddon, they obviously won’t be able to win - most importantly, stay in the Earth’s gravity field and don’t fly too far, it will be easier to control the approaching meteorites. The best way to defend is to hover at the very bottom of the screen and, without moving, methodically destroy the approaching asteroids, occasionally dodging the crystals fired by aliens. And one more thing: I highly recommend saving Missile Armageddon until the beginning of level 15 if possible, this will help you to have time to take a suitable position. Most importantly, remember that the planet cannot withstand more than 15-20 hits.

So the hour of reckoning has come - the flagship cruiser of aliens is approaching the Earth. Destroying it is not so difficult, but first you have to deal with the remaining asteroids. When the ship appears, shoot its turrets, wait for the third transformation and destroy the central crystal. Everyone, you saved the Earth again.
‹
›
Home
View web version