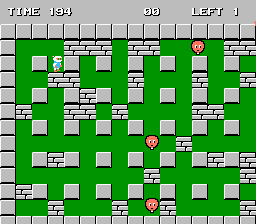 Genre: Action
Perspective: Top-down
Visual: Fixed / Flip-screen
Gameplay: Arcade
Setting: Sci-Fi / Futuristic
Interface: Direct Control
Published by: Hudson Soft USA
Developed by: Hudson Soft Company
Released: 1987
Platforms: Nintendo (NES), TurboGrafx-16 (TG-16), PlayStation (PSX, PS1), DOS
Skillfully arranging the bombs, you have to reconfigure the mazes and entice the enemy, where he bombs and finish. On the playing field (29x11 cells) there are non-detonable (monolithic) and explosive (brick) walls. To go to the next stage, you need to destroy all the enemies and find a sealed door. In addition, at each stage there is also a sealed prize. This PRIZE can give:- an increase in the explosion radius (steps 1.7, 15.19, 27, 38);- increase in the number of simultaneously installed bombs (stages 2,5,6,11,12,17,23,28,32);- control of the bombing by the button "B" instead of the detonator with the clock mechanism (steps 3, 8, 13, 20, 22, 24, 29, 33, 37, 41,44, 48);- acceleration (stage 4);- the ability to pass through bombs (stages 9, 14, 18, 21, 25, 35, 43, 47);- the ability to pass through blasting walls (steps 10, 16, 31, 39, 42, 46);- invulnerability to bomb explosions (stages 30, 36, 49);- complete invulnerability (stages 26, 34, 40, 45, 50).When the blazed door or prize is undermined, new enemies appear. If the hero does not manage to leave the stage in the allotted time, the usual enemies are replaced by faster and more aggressive ones. One life is added for each stage passed.At the beginning of the game, you still do not have enough experienced demoman to rely only on short-range bombs equipped with a clockwork. However, their capacity is quite enough to smash the nearby brick walls, at the same time destroying the zazevavshihsya enemies. Putting such a bomb (button A), do not hesitate, and as in childhood quickly run back to a safe distance.Exit from the labyrinth of each level is hidden behind the disguised door. Having finished with the enemies and finding it, you get new, more powerful explosive devices, up to mines with remote control (explosion - button B). And you yourself are gradually gaining experience: become faster and more efficient, mastering the passage through walls and even bombs, acquire (at the time) the property of non-destructiveness. And by the 50th stage, you already fully adapt to put a series of 5 or more (if the control has been undermined) bombs, without much thought, how many enemies will now cover.