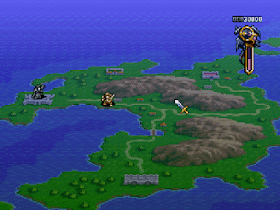 Genre: Role-playing (RPG), Strategy
Perspective: Diagonal-down
Visual: Isometric
Pacing: Real-time, Turn-based
Setting: Fantasy
Published by: Atlus Software Inc.
Developed by: Quest Corporation
Released: 1997
Platforms: PlayStation (PSX, PS1), Super Nintendo (SNES)
A very fast-paced strategy RPG with a compelling storyline and multiple different endings (13 options!), depending on your actions. The classic version of the game has been enhanced with special lighting effects related to magic spells and actions, as well as great sound and modern 3D graphics. You are a rebel leader seeking to overthrow the ruling regime in the Zeteginean Empire. Devilish forces wrested power in the country from the hands of the original rulers, and you are raising an uprising against them. As the game progresses, you will recruit supporters, form an army and command it. However, oh, how difficult it is to survive in this struggle! You will have to fight not only with the loyal soldiers of the Empire, but also with traitors in your own camp. And even with yourself!
As in many role-playing games, here you will have to rely on your own moral principles, which will determine the nature of your actions in the game! And the rebels can become fair, neutral or mean depending on your decisions. And, accordingly, this will determine the nature of each of the 13 endings.
‹
›
Home
View web version