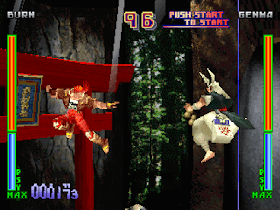 Genre: Action
Perspective: 3rd-person
Art: Anime / Manga
Gameplay: Fighting
Setting: Cyberpunk / dark sci-fi
Published by: Acclaim Entertainment
Developed by: Taito Corporation
Released: 1997
Platform: PlayStation (PSX, PS1)
It would seem, how today - after the appearance of so many bestsellers in the genre of games - martial arts - you can surprise and attract fans of this genre? The creators of Psychic Force, however, found a new wonderful theme: in their game, the fighters, as it were, overcome the force of gravity, and the fights are of a completely unusual nature. Namely, fights take place in an invisible magical room - Kekkai - created by the concentration of psychic energy. The wrestlers themselves use the same energy to inflict damage on the enemy. They send long-range invisible psychic bolts as standard moves. The control system uses only two attack buttons - strong and weak - that regulate the speed of these charges and the strength of the impact. Special moves are performed by the now standard (in Street Fighter experience) circular movements on the direction key, by pressing the Forward or Away buttons and the action button. A separate Guard button is used for protection.
During the fight, opponents throw each other on invisible walls, increasing the damage done. But the fighters stay upright all the time - they just float in the air. Their main attacking movements are dashes towards the enemy at different speeds and in different directions; mastering this technique of management is worth a lot of work. That's why Psychic Force includes a detailed training mode. In this mode, the computer opponent remains passive and can take unlimited damage. In addition, in addition to the standard Arcade mode, there is a Story mode, when the fight is accompanied by extensive dialogues and text descriptions of techniques.
In a word, this game is very unusual, worthy of all attention even from highly experienced players.
‹
›
Home
View web version