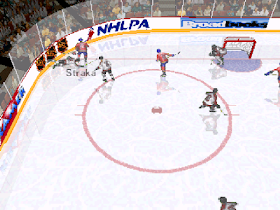 Genre: Sports
Perspective: Bird's-eye view
Interface: Direct control
Sport: Hockey
Published by: Sony Computer Entertainment of America
Developed by: Killer Game
Released: 1996
Platform: PlayStation (PSX, PS1)
Second edition of NHL FaceOff. And although a picky gamer can easily find some graphic implementation flaws in this product (the animation technique of hockey players adopted by the developers today seems outdated), for hockey fans this is a great gift, completely captivating with its game action and a huge number of completely innovative finds. In terms of strategy implementation, the NHL FaceOff 97 hockey game has left far behind all well-known hockey imitators. Consider the new icon-based pass management system that lets you pass to any teammate at any time!
It goes without saying that all the usual components of hockey imitation are implemented here: all the NHL teams of the 1997 season, the All Stars 1996 team, provides for the creation of new players, replacements during matches, four game modes - Exhibition, Season, Play-Off and Practice ... An extremely advanced control system allows you to throw on the move, touch up shots, make false swings, and much more. Well thought out and ranked game difficulty levels that you can choose from. The game has become attractive for both novice hockey players and avid professionals.

On the Create Player screen, enter the following names (these are the names of the programmers from Killer Game):
Enter "1" for the player's number, "F" for their position on the court, "150" for their weight, "R" for their skill, and all other numbers are the same. When you go over. When you go to the Sign Free Agent screen, you will notice that their total playability is now 99.
‹
›
Home
View web version